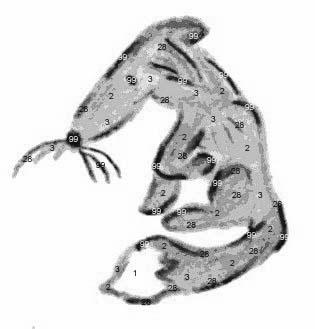 When you try to learn about the fur industry, you are likely to run into imprecise statements: "millions of animals" are victimized by fur trade or "thousands of jobs " are provided by the fur industry... With the exact numbers unknown or ignored, advocates and opponents of fur fashion commonly accuse each other of "exaggerating" or "play down" the presumed facts.

In order to anchor our campaign in solid ground, we make explicit what the facts are and from which sources this information is derived. The following numbers are taken from sources that either are impartial in nature (Wikipedia, public media, legal texts), have been subjected to scientific review (official statistics, reports and investigations) - or are even published by the advocates of the fur industry themselves!

This way, you can be sure that - albeit Fur-was-Alive's position is biased towards the anti-fur stance - your information is objective and verifiable.

1 Billion Euro is the volume of sales for the fur industry within Germany. (2)

The Danish researchers Heller and Jeppesen have launched a research program that "unequivocally" shows that foxes don't suffer on fur farms. 60% of the researchers financial resources come from fur trader associations in Denmark, Norway, the Netherlands, Great Britain , Sweden and Finnland, 40% was provided by the Internationale Fur Trade Federation. (5) It is the results of these studies that are reiterated by the fur industry as allegedly showing that animals do alright on fur farms.

[The rate of unemployment in the EU (9,7%) would remain constant if ALL those employed by the fur industry would lose their jobs].

70,4% of German citizens would like to see the abolition of fur farming in Germany. (12)

64% of Mink pelts are produced on European farms (amounting to 30 Millions of minks per year).  (1)

56% of world-wide production of fox pelts comes from European farms ( 2.1 Millions of foxes per year). (1)

Worldwide, 50,625 Millions of minks and foxes are killed each year on fur farms. (1)

The actual numbers of animals killed for fur are much higher, since in addition to minks, foxes, cows and sheep, a variety of further animals are "farmed" for fur, e.g. chincillas, rabbits, squirrels, muskrats, cats and dogs; data for these animals are not included in source (1)]

In Germany, the country with the arguably strictest regulations for fur farms today, the remaining 7 fur farms operate illegaly (according to out-dated regulations). 15 farms closed down in the advent of the stricter regulations in 2012. (16)

Albeit being allegedly "animal friendly", the new regulations still only allot 1 square meter of space per mink, a minimum of 3 square meter  of area times 1 meter height per cage (typically populated with more than one fox). (6)

[Evidently, the minimal standards for fur farm cages are not apt to satisfy animals' behavioural needs. Yet, these standards are too strict for fur farmers. The 7 illegally operating fur farms do not comply with these new regulations - even though they have had a minimum transition periode of 5 years (between 2006 and December 2011, some even until 2016) before the new law was enforced. Now, the German fur industry sues the German government, i.a. referring to the Heller & Jeppesen studies (see above), and say that the new regulations are unneccessary since animals are alright with the old standards].

An animal produces about 15 kilograms of waste in its short life (10) . The new regulations say that the waste must be cleaned away once a week (before, the manure was left to pile up under the cages) (6), still confining animals to a life above their own remains. In nature, carnivores defecate far away from their sleeping place.

Born in spring, animals on fur farms are killed in fall when they are about 8 months old (13) - at this time, these animals would just be leaving their parents to begin a life on their own.

Minks are commonly suffocated with Carbonmonoxide (the output of an engine). It takes about 60 -180 seconds (1-3 minutes) before they begin to be stupefied by the gas - and many more minutes until they are dead. (10)

The most common killing method for foxes is electrocution. It takes 7 seconds of electicity runnin through their body before they die. (10)

From 9. November 2014 onward, fur fashion must be labelled in European stores. Until then, millions of unlabelled fur items will be bought by ignorant consumers. (13)

The Bremer Umweltinstitut (Bremen Institute for the Environment) took 35 samples from fur fashion items and subjected them to chemical analysis. The results were published in "Gift im Pelz - Report II 2011" ("Poison in Pelts") (13), stating that of these samples, ...

... 26 were heavily or very heavily polluted with cancerogene formaldehyde.

... 33 were heavily or very heavily polluted with endocrinely disruptive alkylphenoles.

... 1 was polluted with the internationally banned pesticide DDT.

... 3 were polluted with a critical level of heavy metals.

In 12 samples, the pollutions were so high that charges were filed against the producers.

The high toxicity of fur and leather products has abundantly been confirmed in independent investigations (cf. source 18).